An Dream Dearg protest for #Respect, #Recognition and #Rights continues

An Dream Dearg is taking their #DeargLeFearg campaign to the streets today in the first of a series of protest actions planned to secure the legislation and rights promised to us over 10 years ago. An Dream Dearg was established in 2014 and reconvened in October 2016 following a consistent pattern of continuous attack on the Irish language in recent months from Executive Ministers and public representatives whose aim is to marginalise our community and prevent the delivery of outstanding commitments to equality for Irish speakers.

‘We would like to thank the many thousands of people who have supported our campaign and stood with the most disadvantaged in our community whilst £500,000,00 have been squandered through the RHI scandal. Their support ultimately left the Minister with no choice but to restore the Líofa Gaeltacht Bursary scheme this morning.

“The aims of An Dream Dearg are much wider and more comprehensive that this Gaeltacht bursary scheme.

‘The Irish language community are no longer willing to accept being treated as second class citizens. 18 Years after the Good Friday Agreement, and more than 10 years since the commitment to an Irish Language Act in the internationally binding St Andrew’s Agreement of 2006, the Irish-language community are #DeargLeFearg at the repeated failure of authorities to protect and promote our rights.

‘We have taken to the streets today to give voice to the widespread frustration and anger at the hostile and shameful attacks on our community. We are not asking for any special concession or privilege but to be treated with respect and dignity. This can only be delivered through enshrined legislation that secures our rights as Irish speakers.

‘We welcome the extensive cross party support we have received to date across the community and would like to ask all those who have stood with us continue that support until our rights are secured.

‘Any future political negotiations or attempts to achieve agreement on restoring the Power-sharing executive must be dependent on the guaranteed delivery of outstanding commitments regarding Irish language rights. This is only the beginning of our campaign.’

Classes starting back next week! 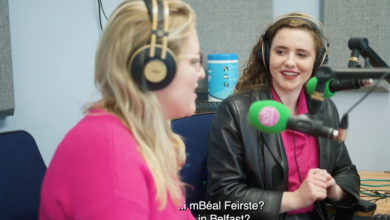