Fergus Ó hÍr, Máire Nic an Bhaird, Máire Nic Fhionnachtaigh and Mícheál Mac Giolla Ghunna all spoke as part of our Irish-language panel discussion on the hard work and the subsequent achievements for the Irish language to celebrate Coláiste Feirste’s 30th birthday.  Some of the drama that was written for the school’s 30th birthday and performed by the school’s drama team was shown on video before the discussion began. 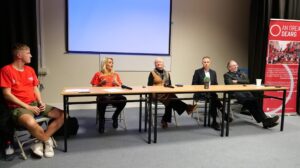 Fergus Ó hÍr is a grassroots activist that took part in the Civil Rights Association and the Anti-H-Block campaign who helped found Raidió Fáilte and Coláiste Feirste, the first Irish-medium secondary school in the six counties.  Máire Nic an Bhaird is a teacher at Coláiste Feirste who grew up through the Irish-medium education system in the early years and campaigned against the 1737 Act that banned the use of Irish in the courts.  Máire Nic Fhionnachtaigh is a presenter on Raidió Fáilte who has bundles of experience as a language activist, especially with regards to the Caife Ghlas, Cultúrlann Mac Adaim Ó Fiach and as a governor and parent of Coláiste Feirste.  Mícheál Mac Giolla Ghunna is the principal of Coláiste Feirste who took part in the campaigns for the Irish primary schools, in Queen’s University Belfast, in Gaeltacht na Fuiseoige and against the political vetting of Glór na nGael. 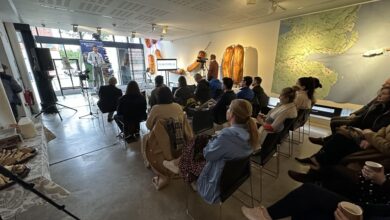 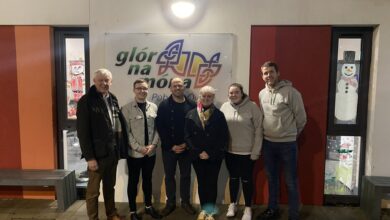 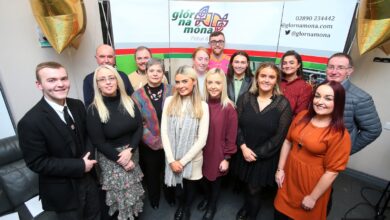