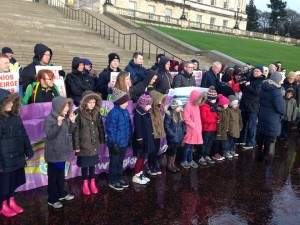 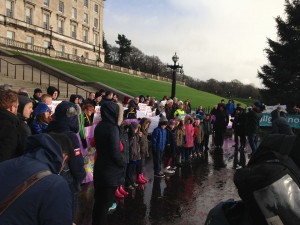 Hundreds Irish speakers and supporters of the language, young and old, came out yesterday (10-12-14), in spite of the bad weather, to make a strong stand against racism and in favour of equality and diversity. Stemming from the DUP MP Gregory Campbell’s  notorious ‘curry my yogurt’ comments, the rally was organised by the An Tionól Dearg (the Red assembly), a grassroots campaigning forum for the Irish language community who organised the historic Lá Dearg Rally in April of this year which inspired thousands to the streets of Belfast to rally for Equality.

Individual Irish speakers, a range of Irish language organisations and schoolchildren from Belfast-based Irish medium schools braved the elements by descending on Stormont to focus the attention of our politicians and the wider community on the Irish language, to coincide with the UN International Day of Human Rights. The rally hosted a Céilí, seán-nós dancing, while a primary school pupils sang Irish language Christmas carols to keep the spirits high despite the bad weather.

racist. We demand that he withdraw the remarks and apologise for the hurt he has caused the Irish Language community including the thousands of children going through Irish Language education system and the wider community who cherish the Irish language. It is not acceptable, in this day and age, that politicians can insult and attack the native language of this country and her speakers. We welcome the support of the various minority communities who showed solidarity with us today because when our community, is attacked, it is an attack on all minorities and their right to equality.

‘These attacks are not happening in a vacuum but rather against the backdrop of the continued denial of rights for Irish speakers. Eight years after the promise of an Irish language Act in an internationally binding agreement at St Andrews, and sixteen years after the signing of the Good Friday Agreement, Irish speakers are still being treated as second class citizens in this society. We want to live in a progressive, multi-cultural society that embraces diversity and promotes inclusivity. The young people gathered here today deserve to be afforded the same respect and dignity as everyone else in the north and will accept no less in the future.’

Ciarán Mac Giolla Bhéin, of All-Ireland advocacy organisation Conradh na Gaeilge and one of the organisers of the Rally said:

“The turnout today reflects the vibrancy and dedication of the Irish language community and our attempts to push the language back to the centre of the political debate, especially with the cross-party talks ongoing. We want, as a community, to raise awareness about the language and to place the Irish language firmly in the broader human rights discourse.

We are delighted that members from other minority communities came out today to support us and it was important for us to raise our voice today, International Human Rights day, and of course, with one eye on the ongoing political negotiation. The politicians have the power to ensure a better future for the Irish language and we demand that they, especially the British Government, do the right thing.”