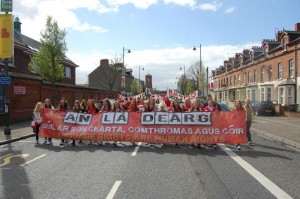 In the aftermath of an ‘An Lá dearg’ a pertinent question has yet to be posed, ‘Why was it that thousands of people descended upon the Gaeltacht Quarter on Saturday the 12th of April to march through Belfast festooned in red?’

They demonstrated their anger at the failure of the Power Sharing Executive at Stormont and the Peace process to protect Irish language rights anddeliver on the commitments made in international agreements toequality for its speakers. The campaigners, who included hundreds of families, young people and school children made the clarion call for ‘Rights, Equality and Fairness’.

The demands are simple;

·         The implementation of the long-promised rights-based Irish language Act

·         A fully resourced, comprehensive Irish-medium education system from pre-school through to university level

·         The adequate resources for the Irish language community.

Although campaigners were ‘Dearg with Fearg’ (red with anger) in conveying the sense of frustration and discontent felt in the Irish language community, all who attended the rally commented on the unique sense of positivity and hope, where all that is inclusive, open and welcoming about our community was expressed with great colour and pride.

We were therefore disappointed that this sense of hope, and the key aims of our campaign weren’t accurately represented in your newspaper coverage of the event. While your coverage in Tuesday’s edition corrected Monday’s clearly questionable recording of rally numbers, it focused on party political disputes and a tiny minority of loyalists who gathered at Castle Street rather than the demands of those attending this hugely successful rally.

We are deeply concerned about how the focus shifted from our campaign to a party-political spat among various political representatives. This is an unwelcome diversion and does a great disservice to the thousands who attended the rally demanding the protection and the promotion of the Irish language.

Like all struggles for human rights in the context of discrimination and marginalisation, our campaign is political. We aim to lobby all those with legal and political responsibility to fulfil their obligations and to treat the Irish language community with the respect and dignity it is entitled to.

Our rally was open to and welcoming of all support from whatever quarter and we are grateful for the support we received from everyone who took part on the day.

From the outset, our campaign has been free from party political or specific organisational influence from any quarter. We will not be distracted from the key rights-based issues at hand by criticising or attacking any particular political party or grouping.

We aim to hold all elected politicians to account. Despite support from many political representatives in the past, we nevertheless find ourselves being structurally discriminated against in terms of rights and resources. For the language to continue to flourish and grow this discrimination must be challenged. Ultimately, this is the responsibility of those in power.

We will therefore be lobbying Governments, elected political representatives, and statutory authorities in the weeks and months ahead to demand that they act upon their obligations and deliver a new dispensation for the Irish language community- free from hostility, discrimination and marginalisation.

This article also stated ‘Conradh na Gaeilge’ were the organisers of the rally  when in actuality, they were only one of a whole range groups, activists and communities from across the country who played a central role in making the ‘La Dearg’ rally such a success.

The strength of the campaign is that it is grass-roots, bottom-up and community-based, and not- aligned specifically to any particular Irish language organisation. Because they felt ownership of the campaign, more than twenty community organisations kindly donated money, from ever floundering resources, in support of an LÁ dearg which helped everything run smoothly on the day.

Thousands of Gaels, with no political mandate or no party political agenda, took to the streets in their droves to make their voices heard. An Lá Dearg was a means of alerting the authorities that the language community in the North will no longer be the poor relation on these islands or in Europe.

The speakers on the platform reflected the views of the Irish language community yet the issues they raised have not received any media attention. Sixteen years on from the Good Friday Agreement, we still have young Gaels being treated like second class citizens and being denied transport access to our schools; 8 years on from the commitment in an international agreement at St Andrews to enact an Irish language act, we are still being denied rights protection; and earlier this year our limited resources and infrastructure were put in serious danger by savage government cuts. People are clearly saying ‘enough is enough’. We are entitled to be treated equally and won’t accept being made to feel invisible in our own country.

Saturday was an expression of both a growing sense of anger and appetite for change in the Irish language community. The momentum behind this demand for equality was to be heard in the voices of thousands of Gaels who deserve a better future for the next generation. It was only the beginning. 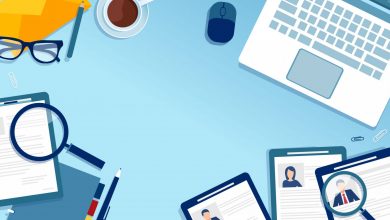