Glór na Móna have welcomed the erection of a new bi-lingual sign in Ardmonagh Parade or Paráid Ard Móna in Irish as evidence of the growth and desire of the local community to move forward using their native language to do so.

Feargal Mac Ionrachtaigh, the group’s chairperson explained, ‘To date we have got official recognition for nine streets in the area. This has been achieved through the hard work of activists with the support of local residents. We continue to lobby at council level to change the discriminatory law governing reet names so that communities that are using language and culture to promote themselves do not have to expend so much energy and resources doing so’.

As the law stands, a petition with the support of two thirds of local residents has to be submitted on a street by street basis for a bi-lingual sign to be erected.

The council on submission of a petition then surveys the street in question to ascertain the validity of the initial survey. Activists then have to revisit the street to make sure that the council survey is returned.

Feargal continued,‘It is ridiculous that in an area with so much Irish speakers and where support for the language is increasingly evident that those of us working to renew this area using its one its biggest resources have to expend so much energy in Gaelicisng our streets. It is clear that with a bit of good will and common sense, any realistic assessment  would indicate  that this is a massive waste of time and resources of both our own and council resources, especially when support for the Irish signs is obvious. Every street Gaelicised so far has had a 98% positive response from residents’.

Glór na Móna who are spearheading the campaign to Gaelicise every street in the Upper Springfield are appealing to local residents to get involved. If you want your street name to be bi-lingual, Glór na Móna will be happy to help, to do so contact the organisation’s development officer, Cormac on 90619773 or
nagaeilabu@gmail.com. 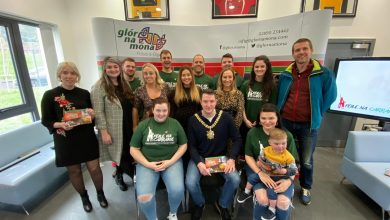 Upper Springfield language activists take matters into their own hands