We have teamed up with Ballymurphy Ex-Prisoners association in developing an exciting new community education and commemorative initiative. Ballymurphy Republican History Project officially launch on Wednesday 1 March 2017 in the O’Donnells GAA club with a special evening focusing on the Blanket Protests and Hunger Strikes in Song and Story. It was the first of a series of events and programmes that included lectures, workshops, film-screenings, mural art, museum tours, exhibitions and publications culminating in the Tomas Ashe memorial weekend in September 2017.

“Our ex-prisoner association were inspired by the 2017 centenary of the death of Tomas Ashe, the first republican hunger striker to die in the 20th century back in 1917. We had been speaking about organising a few events leading up to a Thomas Ashe weekend in September where we built a memorial wall in the Ballymurphy Garden in memory of all those republican martyrs who died through Hunger Strike from Ashe all the way to Micky Devine in 1981.

‘When we learned that our local Irish language youth and community group, Glór na Móna, were also planning a community history project drawing on the Ashe centenary, we met up and decided to joining both ideas together and partner on the project. From the outset, we agreed that the project would be non-party political, totally inclusive and open to all from the wider republican family, regardless of political opinion or affiliation.”

We aim to promote local republican history and create a platform for community cohesion, solidarity and empowerment. This project aims to disseminate and celebrate our history and radical republican politics in order to inspire the next generation of community leaders.

We welcome all help and support from anyone looking to get involved in the project. They can simply contact Glór na Móna or Ballymurphy ex-prisoners through facebook or email us on oifig@glornamona.com /028902344442. 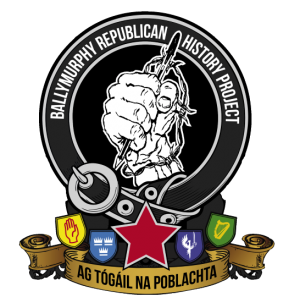